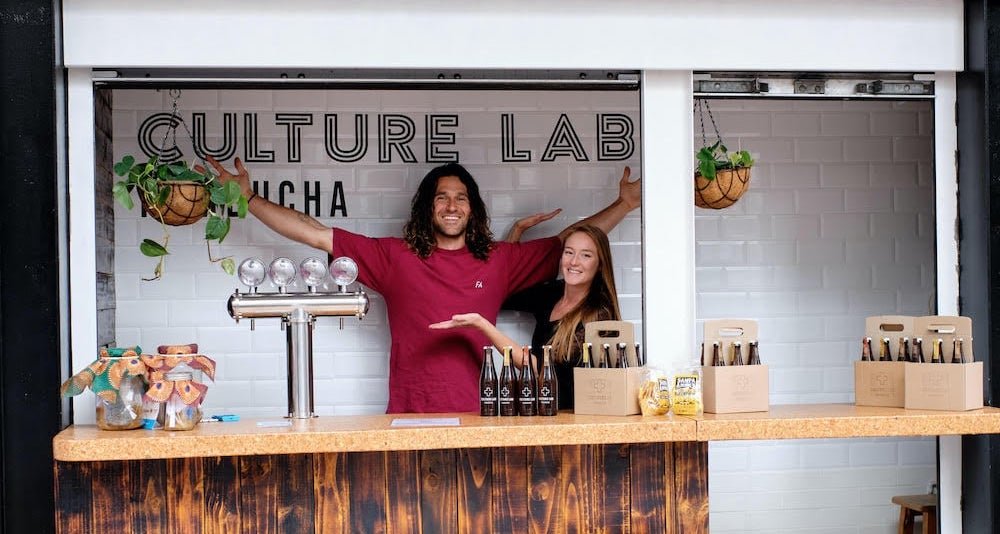 I’ll give you the fairy tale intro. It all started about 7 years ago when my now wife and business partner, Amy, prompted me to try a fermented soft drink they called “KOM-BOO-CHA”. It sounded weird so I said yes. A bottle arrived and I took my very first sip. And just like that I was hooked. I announced then and there we were going to make this stuff, only better. So, with all the arrogance and stupidity to match, we bought some cultures online and proceeded to turn our kitchen into a sticky mess. After that things escalated pretty fast. My dad gifted us his old 200L fermentation tank and soon after we bought two more 500L tanks. All of this shoved into the garden shed – and this is exactly how CultureLab was born. We are still not sure how and why it all happened. Did we choose to make kombucha or did it choose us? Well, we might never be sure, I think we were looking for a positive product – something that could add value and get us out of bed smiling, and for that end we found it.

I always liked fermentation. When I grew up my dad would make his own beer and lots of wine, they had wine tasting evenings and from an alarmingly young age my parents would let me and my siblings join in the fun – I mean tasting, not drinking. We learned to identify the subtle differences between the main cultivars and later the details of each.

Only problem was I never really tolerated alcohol that well. So, when we found out that kombucha was alcohol free and had numerous health benefits, I was all in. With a little encouragement from friends and family, Amy and I registered CultureLab Kombucha in September of 2017 and went out to make our millions.

We started selling our first bottles in the Cederberg to the local and international rock-climbing community that floc to the area every winter. Being mostly hippies and foreigners, they at least knew what Kombucha was and things got moving. We got connected to the local community there and got inspired by the vast array of fynbos flora. We never liked the idea of adding fruits to kombucha. It didn’t really suit the ferment and added a lot of sugar, so we started using local botanicals instead. Amy and I are avid outdoor enthusiasts. We spend a lot of the little time we have rock climbing, running and playing in the mountains, so it just felt great to be able to infuse the landscape that inspired us so much into our products.

We now run our business from Capricorn Business Park in Muizenberg and we’re growing everyday. We look forward to taking CultureLab mainstream and introducing it to as many South Africans as possible.

It has always been one of our goals to give South Africans a healthy alternative to sugar laden soft drinks. We see so many people affected by poor lifestyle choices because people just don’t have many, if any, options. If we had to walk into any given store right now it would be pretty unlikely if you could find any beverage at all that would not spike your insulin and inflame your gut. You can have pretty much any drink as long as it is a sugar drink and that’s just sad. I often see people sit down to have a healthy meal only to wash it down with a glass of coke. Eish. We get it though, a lot of South Africans often don’t like healthy products because they too often taste terrible and when we do cough up the extra hard-earned buck, often we are awarded with something that tastes like flavored cardboard. But it doesn’t have to be this way. We are on a mission to prove that health can and should taste great.

So right now you might be wondering:” What is this ‘KOM-BOO-CHA’ anyway and should I drink it?” So, let’s get into it.

Kombucha is as old as the times itself. Nobody knows for sure but we know it had its roots about 2000 years ago in the far east. Legends have it that an emperor looking to live forever was given kombucha by his wisemen as the elixir of life. It soon gained popularity and started to spread around the world via the old trade routes.

About 20 years ago kombucha exploded back onto the scene in the USA and is now globally a billion-dollar industry.

Claims to its various health benefits seem as wild as ever before. So, let’s tread with caution and have a closer look at what exactly it is and what it can do for us.

Kombucha is made from fermenting sweet tea with a Symbiotic Culture Of Bacteria and Yeast also known by its acronym SCOBY. To make a ferment one would brew sweet tea, add ready-made kombucha to it and a peptile culture referred to as “the Mother”. Pretty weird. ‘The Mothers’ come in all shapes and sizes. Growing atop of each new ferment surface formed by various bacteria and yeast. Some pearly white and beautiful, while others look like they could scare off self-proclaimed hard men. Here at CultureLab we love them all the same.

So, you might be wondering if kombucha contains yeast, why is it not alcoholic? The answer is rather beautiful. Symbiotically the bacteria work together with the yeast. The yeast breakdown the sugars and create small amounts of alcohol and then in turn the bacteria break down the alcohol and produce beneficial acids and enzymes that give kombucha it’s vinegary sour taste and probiotic rich profile. No you can’t get tipsy on it, believe me we’ve tried. The trace amounts of alcohol typically don’t exceed 0,5%. It is for this reason it is considered a fermented soft drink.

Fermented foods are bacteria rich and while we generally have a negative perception of bacteria it couldn’t be further from the truth. I hate to break it to you, maybe have a seat. Truth be told you and everybody you know, even your beloved little lap dog, have more bacteria cells in their body than human cells by a factor of 1 to 9 and your dog has no human cells at all. I know, shut the front door, right? So, by this definition you could say you are 9 times more bacteria than human. While covering every inch of our bodies bacteria make up only about 2kg of our total body weight and the human gut biome is home to more than 1000 different types of bacteria. With our gut now being considered as our second brain it is no wonder that keeping this guy healthy is probably a pretty good idea.

Kombucha can help do this by populating your gut with good bacteria and B-vitamin rich yeast. Lowering the acidity of the stomach and supporting digestion and nutrition absorption.

Kombucha contain B and C vitamins. B1 Thiamine, B6 and B12 help with cognitive function, stabilizing our mood and help fight against depression. Kombucha is also replete in vitamin C -being one of the safest and most effective nutrients, it aids in too many health benefits to list here; but did you know it also aids in stress relief by reducing the effect of cortisol in the body. Our CultureLab Kombucha has more than 60% of your recommended daily dose.

An estimated 90% of the body’s serotonin is produced in the gut and 70% of the body’s immune system is located in the gut, where a diversity of bacteria is best. We all know what we eat can affect our daily energy levels and our body weight, but did you know it also directly affects our immune system? So next time you reach for that energy drink, why not reach for a CultureLab Kombucha instead? Kombucha can give you a great lift without the high sugar and caffeine of energy drinks, while at the same time supporting a healthy gut.

While kombucha is much lower in relation to juices and regular sodas it is not sugar free. While the fermentation converts most it still contains some sugar. Those amounts will vary from brand to brand. However, there might be a soft landing to this too. Kombucha contains acetic acid which helps maintain blood sugar levels. Ultimately reducing the spike in blood sugars.

Kombucha is an adaptogen, meaning it is a plant derivative that help our body keep it’s innate healthy balance. Adaptogens are good sources of antioxidants that help remove free radicals and support a healthy liver, reduce sugar and alcohol cravings and boost immunity, energy and stamina.

Here are some other health benefits that have been observed:

So now if you find yourself being a little skeptical, I won’t blame you. I personally don’t believe that kombucha is some elixir to all human ailments, but I do think we tend to underestimate what can happen when we make good choices. What I have learned is that the body has an amazing ability to heal itself. It wants to be in balance and when it is given the tools to do so it often takes care of the rest. This is how I believe kombucha is able to do some pretty radical things. Kombucha is not a one stop shop but it is a good choice and a great start; and if you try it out, I hope that it will lead you to make many more good choices and ultimately live a more fulfilling and happy life.